This is an on-demand article, I am writing it because one of the follower was asking about it and definitely it will help others as well. J I hope it will motivate others as well to ask any thing on Insidemstech.com and I’ll try my best to help each one of you.

The above comparison shows very high level difference but these are core differentiation points between standard and enterprise edition. * shows that these are technical possibilities and support matrix but doesn’t guarantee any performance. For example, if you collocate Mediation server with Front End servers then concurrent call reduces. For more details and in-depth information you can search role specific blog posts here and if don’t find any information please let me know, I’ll try to help you out.

If you will look into the logs then you can easily find it out that the process couldn’t find certificate chain and it happens because of root certificate. It simply means that the root certificate of certification authority does not exist on the local server from where the request is being generated.

Now, let me use step by step process to identify and resolve this problem.

You will not find the root CA in both “Current User” and “Local Computer”. 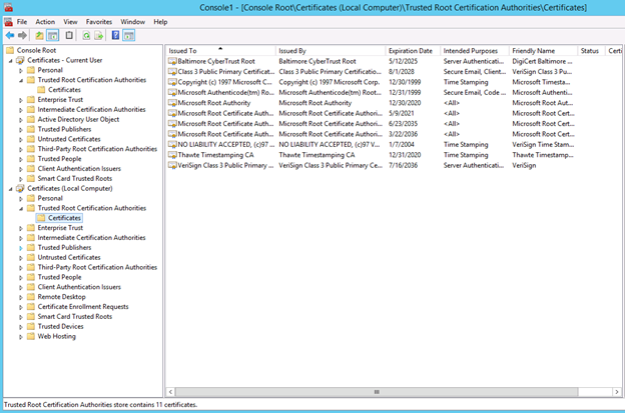 You can check this root certificate chain in both the locations “Local Computer” and “Current User”. 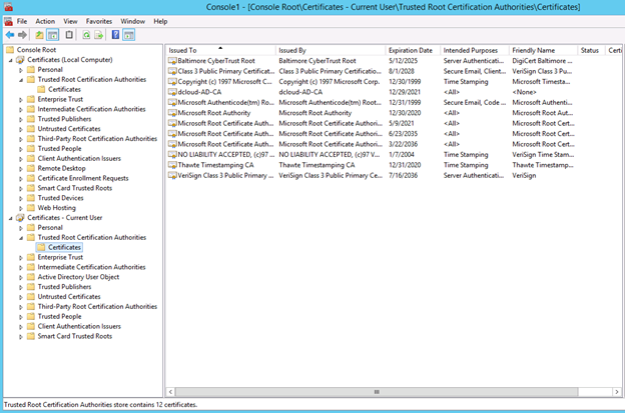 Now, you should try to request and assign the certificate.

Hope, it helps you.

Though, these functionality may be enabled in future but as of now not available. Therefore, Microsoft doesn’t recommend or support Lync / Skype for Business deployment on Azure IaaS.

Create a mind map or sketch a rough design diagram of Skype for Business deployment and collect all the information that you need to size the application.

Create a rough Bill of Material and Bill of Quantity in your mind or note it down somewhere.

Create a list of things that you need to finish the deployment process such as DNS and Certificate requirement.

Look at the end user connectivity as well because at the end of the day end users have to consume these services.

Based on the table above, it really looks simple. But in actual, it is not. There are many limitations which you can find while deploying Lync / Skype for Business on Azure IaaS. As of now, you should get familiar with all the terminologies. Next part of this blog post will cover the limitations and will describe why Microsoft does not recommend Lync / Skype for Business on Azure IaaS.

Microsoft Azure is one of the key Infrastructure as a Service platform in public cloud space. Many organizations are looking at it as an alternative option for traditional datacenter. Therefore, it is necessary for consultant and architects to know about the enterprise application suitability on Azure IaaS. When customer look for Microsoft Public Cloud offerings, most of the time you can observe that customer is looking for Microsoft based applications or custom applications which runs on Microsoft operating system.

Let me take an opportunity to discuss about Microsoft Business Productivity applications and their suitability with Azure IaaS. Microsoft SharePoint was the first enterprise application from business productivity suite which was ready long back to deploy on Azure IaaS. Next precedence had been given to Exchange and now it is chance for Lync / Skype for Business.

Below diagram illustrates how traditional datacenter deployment should look like in high level.

I am describing this traditional deployment first because you easily can correlate it with Azure IaaS later point in time. Now, let’s assume customer has basic infrastructure in-place such as Active Directory, Office Web Apps or Office Online server and Reverse Proxy. Therefore, it is a time for you to design or size Skype for Business server roles. I am taking a simple example of Skype for Business Enterprise Edition pool with three servers. In this example, I am collocating server roles wherever possible and not focusing on few additional server roles such as persistent chat and VIS.

Below table shows the typical server configuration based on Microsoft recommendation.

Apart from this you need to consider many other factors in datacenter such as Network, Firewall, Load Balancers and Quality of service configuration capability. Next part of this article, maps these requirements with Azure IaaS and covers the best possible configuration.

PSTN calling feature in Skype for Business online allows users to make calls to and receive calls from people inside and outside the organization. This feature enables administrators to search, acquire and assign the phone numbers to the users in the organization. Users enabled for PSTN calling in Office 365 can make voice calls across all Skype for Business devices including PCs, mobile devices and VOIP phones. Users can also control their calls through mute/unmute, hold/resume, call transfers, and call forwarding features, and if necessary, make emergency calls. It provides two different types of PSTN voice calling plans:

PSTN Domestic Calling: PSTN Domestic Calling allows user to make domestic calls with in the same country or region. User’s license usage location determines what is considered “domestic” for a specific user. Each user gets PSTN calling minutes that consist of both domestic outgoing, and domestic and international inbound calls (originating from anywhere in the world). Following are the PSTN calling minutes for specific locations:

In this scenario, the other phone number rings, and you can answer the transferred call, but you hear no audio. Additionally, the client window of the existing active PSTN call shows the following error:

Below are the series of blogposts related to Skype for Business Cloud PBX and Cloud Connector Edition:

Now, I am going to cover the different releases of Skype for Business Cloud Connector Edition in the following table.

For the initial release, please read the series of blogposts and for specific release updates read the respective blogposts which covers the changes and enhancement.

There are myths around the director server role in Lync Server 2013 and Skype for Business Server 2015. Let me give you the facts:

What, When, Why, Where and How?

Many IT professionals, even consultants and architects who work on Microsoft Unified Communication area may have all these questions in their mind.

What: Director is an optional server role in Lync Server 2013 and Skype for Business Server 2015. Director authenticates user requests, but doesn’t home any user accounts.

When: Director may require in following conditions:

Where: Director can be deployed in corporate network where you deploy Front End servers and can never be collocated with any other role.

How: You need to use the same process which you use to add mediation server or any other additional server role in Lync/Skype for Business site.

As I mentioned in the beginning, director is an optional server role and deployment of director totally depends on the business need and discretion.

It serves as an internal next hop server to which an Edge Server routes inbound SIP traffic intended for internal servers. If the network is flooded with invalid external traffic in such an attack, this traffic ends at the Director.

If you deploy multiple Front End pools at a central site, by adding a Director to that site you can streamline authentication requests and improve performance. In this scenario, all requests go first to the Director, which then routes them to the correct Front End pool.

Now, I think you can pick the best option and design your Skype for Business solution based on the specific requirements.